Bella Coola Airport, located in British Columbia, is situated within a narrow valley along the Bella Coola River. There's not much room for error here, so make sure you plan an escape route ahead of time if you need to go around!

Located in British Columbia along the Columbia River, Castlegar/West Kootenay Airport sits at the base of some higher terrain just off either end of the runway, so a straight-in approach probably isn't a good idea. Be prepared for a sporty arrival into this airport.

Dawson City Airport is located in Yukon in northwest Canada along the Klondike River. At first glance, it may appear this airport doesn't pose much of a challenge. And maybe not for most. But this airport is served seasonally by Air North with daily service to and from Fairbanks, Alaska in a Boeing 737. While it certainly isn't necessary to do so for the achievement, you might try completing it in a similar-sized airliner to see if you can safely land on this small 5000' runway within the valley!

With no real hazardous terrain to worry about, Deer Lake Airport is located just northeast of the lake by the same name in Newfoundland. It is served by several passenger airlines, so there are plenty of options if you wish to fly a real-world route to visit this newly hand-crafted airport.

Finally, Iqaluit Airport is situated on the coast of the Labrador Sea, but a tropical paradise it is not. Iqaluit is home to some harsh winter weather, with average high temperatures being below freezing for eights months out of the year. The area receives an average of over 90 inches of snow per year, which can occur at any time of year, though very little tends to fall in July and August. You might want to venture here only in an aircraft with strong anti-ice capabilities!

Note: This achievement was created in celebration of the Microsoft Flight Simulator World Update XI - Canada release, but you may complete the flights in any simulator of your choice!

In order to obtain this multi-achievement you must complete each of the following achievements. 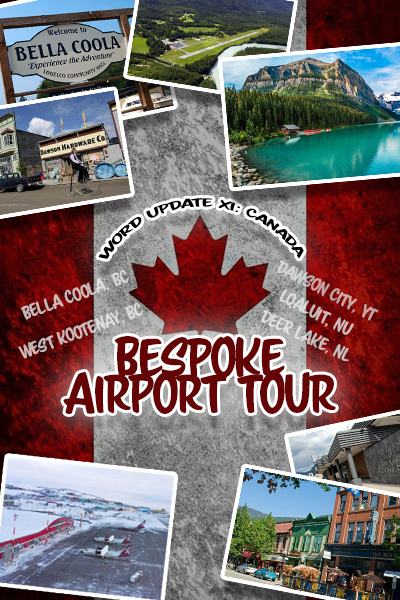