Rome (Italian and Latin: Roma [ˈroːma] (listen)) is the capital city of Italy. It is also the capital of the Lazio region, the centre of the Metropolitan City of Rome, and a special comune named Comune di Roma Capitale.

Rome is often referred to as the City of Seven Hills due to its geographic location, and also as the "Eternal City". Rome is generally considered to be the "cradle of Western Christian culture and civilization", and the center of the Catholic Church.

Rome is regarded as one of the world's most beautiful ancient cities and contains vast amounts of priceless works of art, palaces, museums, parks, churches, gardens, basilicas, temples, villas, piazzas, theatres, and other venues in general. As one of the world's most important and visited cities, there are numerous popular tourist attractions. In 2005, the city received 19.5 million global visitors. The 5 most visited places in Rome are: #1 Pantheon, #2 The Colosseum, #3 Trevi Fountain, #4 Sistine Chapel and #5 The Roman Forum.

Rome today is one of the most important tourist destinations of the world, due to the incalculable immensity of its archaeological and artistic treasures, as well as for the charm of its unique traditions, the beauty of its panoramic views, and the majesty of its magnificent "villas" (parks).

Depart from an airport of your choice, fly to and land at LIRA, your flight distance must be further than 150 nm. Your landing rate must not exceed 200 f/m. 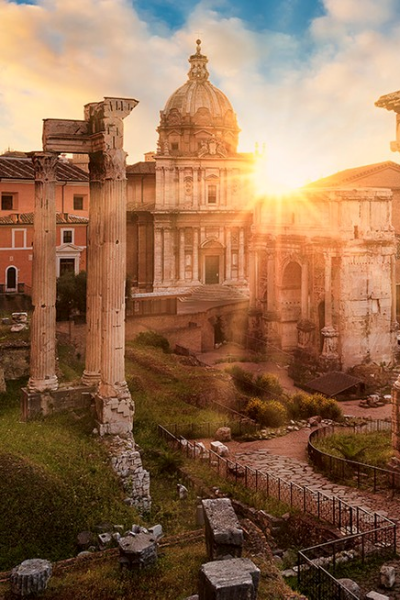